This shader comes with a nice Fresnel function, now I had never hear of Fresnel (to my shame) until I started to play with shaders, but the Fresnel Term is useful for reflective surfaces as it calculates the ratio between reflected and refracted rays and so the surface becomes more reflective the angle of view changes. I have given 3 examples of the glass shader, the first calculates it's own Fresnel term, the second is passed a texture to emulate the Fresnel term and the last uses no Fresnel term at all.

As you will see the shaders are drawn in the following order from top to bottom, self calculating Fresnel Term, Fresnel texture passed and then no Fresnel used. I have also added a tint parameter so the class can be coloured. 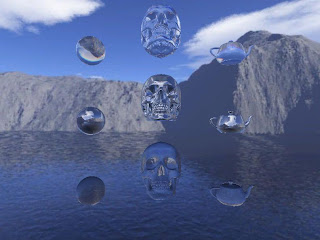 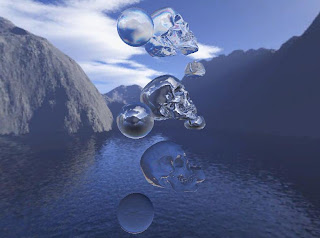 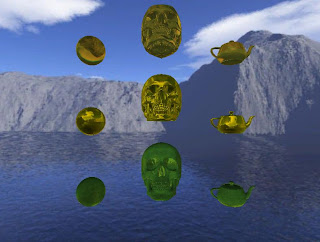 I am not going to give an explanation of the NVIDIA glass shader as I don't feel qualified to having not written it myself, but I will show what we need to pass to the shader to get this effect working.
We need to pass a World, World Inverse Transpose, World View Projection and an Inverse View matrix to the shader like this:

My next post will again be on environment maps using a reflection and refraction method.

You can download the solution here.
Posted by Unknown at 14:23